Tomoaki Ishigaki serves as Director of the Economic Policy Division at the Ministry of Foreign Affairs of Japan. Since joining the Ministry in 1994, he has covered various multilateral and bilateral negotiations ranging from international trade at the WTO, the International Criminal Court, the Arms Trade Treaty to climate change negotiations at COP22 and COP23. He also worked as Deputy Cabinet Secretary for Public Affairs at the Prime Minister’s Office (2018-2020) where he was in charge of international media relations and public diplomacy. He currently oversees Japan’s economic diplomacy including G7 and G20 leaders’ meetings, WTO and OECD matters, food and energy security issues, and economic partnership agreements. He is a graduate of Amherst College and studied law at the University of Tokyo before joining the Ministry of Foreign Affairs. He has written a number of articles on international law, disarmament affairs and climate change, and taught at Japanese universities on these subjects. 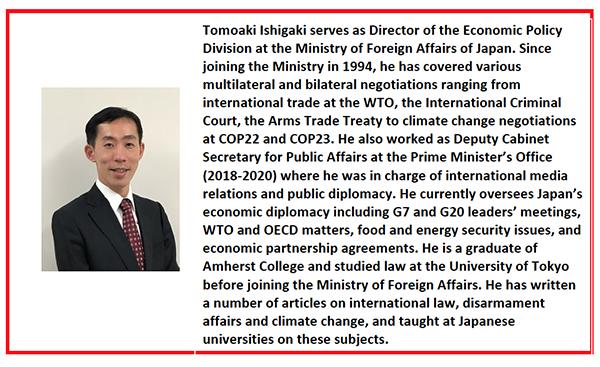 The future of globalization and multilateralism: responding to and looking beyond the Covid-19 pandemic