Ken Endo (遠藤 乾) is Professor of International Politics, School of Law & Dean of the Graduate School of Public Policy, Hokkaido University, Sapporo. He is also Adjunct Fellow, Japan Institute for International Affairs, Tokyo, Japan.
Professor Endo obtained a D.Phil in Politics at St Antony's College, University of Oxford, in 1996; was Visiting Professor, University of Tokyo (2003-16), Fernand Braudel Senior Fellow, European University Institute (2009-10), Visiting Professor & Japan Chair, Sciences Po, Paris (2005 & 2010), Taiwan MOFA fellow (2018). His main publications are: The Presidency of the European Commission under Jacques Delors: The Politics of Shared Leadership (Macmillan, 1999) and The End of Integration (Iwanami, 2013, in Japanese), for which he was awarded the 15th Yomiuri-Chuo Koron Yoshino Sakuzo Prize. He served as one of the two commissioning editors of Iwanami’s 8 vols (c100 articles), on Japanese security (2014-15).
Professor Endo was a member of study groups at the Japanese MOFA’s policy planning unit (2012-13, 2013-14). He also works as a member of 1.5-track Japan-Korea policy dialogue (2012-) and organizes similar events on Sino-Japanese relations, in cooperation with the MOFA. Since 2015 he has been sitting on the MOFA’s policy evaluation committee and from 2017 on he has led a project on Europe at the Japan Institute of International Affairs. Active in engaging in wider civic forums, Prof. Endo is a founding member of the Hokkaido Dialogue, where civic leaders from Japan, China, South Korea and Taiwan discuss issues of common interest. 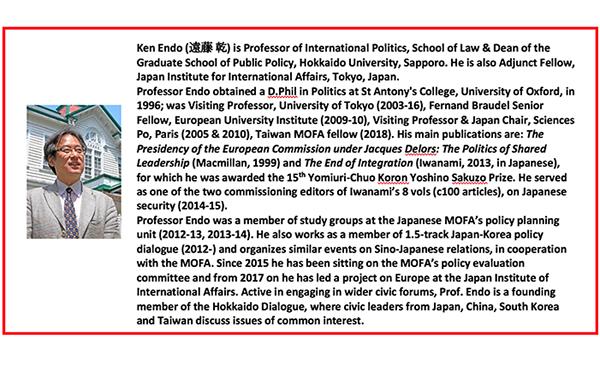