Ambassador Extraordinary and Plenipotentiary, Permanent Representative of Japan to the Organization for Economic Co-operation and Development (OECD). Ambassador Okamura has been working for Africa, first as Ambassador to Côte d'Ivoire (2008-2011), then as Director-General for Africa (2012-2014). He was responsible for organizing the TICAD V (2013) as its Secretary General. As Deputy Permanent Representative to the United Nations (2014-2017), he was in charge of the Africa-related agenda in the Security Council. As the Representative of the Government of Japan for International Peace and Stability Ambassador Extraordinary and Plenipotentiary (2017-2019), he was in charge of Japan's cooperation program for peace and stability in Africa. Ambassador Okamura has long experience in the field of peace and conflict. He worked as Government Chief Coordinator in Japan's Assistance Mission for the Rwandan refugees (1994) and as Chief Political Officer in the United Nations Mission in Kosovo (UNMIK, 1999-2000).  Ambassador Okamura started his career at the Ministry of Foreign Affairs in 1981. He was also posted to Japanese overseas establishments in Algeria, Italy, India, France, and the Mission to the International Organizations in Vienna. 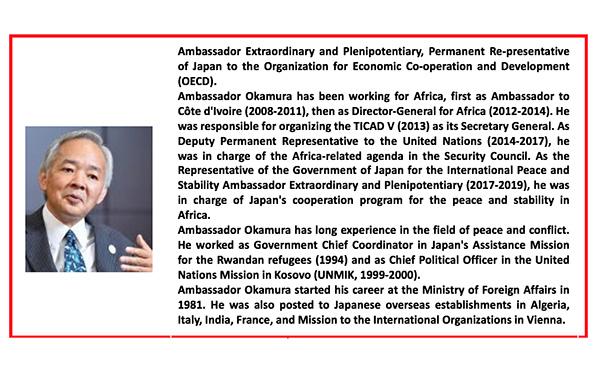 The role of OECD and multilateral cooperation for development: a view from Japan