The history of the Korean peninsula is inseparable from the ongoing attempts at influence by neighboring powers and the presence of a victimization discourse both in Seoul and in Pyongyang. These two factors are integrated perfectly in the Korean proverb that describes how, when whales fight, it is the shrimps that get their backs broken.

During our visit to Seoul last July, the discourse of the principal and students of the Hankyoreh school, responsible for the education of young North Korean refugees in South Korea, was much the same as that of the North Korean ambassador in London, Hyon Hak-bong, who told the Guardian in 2016: “Our nation has been victimised for centuries by one invader and then another.”“North Korea’s UK Ambassador: ‘We Want Peace, But We’ve Been Victimised’,” TheGuardian.com, January 13, 2016, available at: https://www.theguardian.com/world/2016/ jan/13/north-korea-uk-ambassador-we-want-peace-victimised. They added that the major powers should now leave the two Koreas to determine their own destiny, so as to ultimately arrive at the reunification of the peninsula—thus avoiding any discussion of the profound disagreements between two political regimes unable to accept reunification on an equal footing.

Despite their antagonism and the fundamental differences between them, the two Koreas face the same challenge: the difficult search for a balance between dependency and autonomy in relation to regional powers. The rapprochement between the two Koreas that began in early 2018, following a historical low point between 2016 and 2017 in rela - tions since the end of the Cold War due to the absence of inter-Korean trade, cooperation, and even dialogue, has allowed the two countries to espouse their common desire to reduce foreign influence. And yet, although they may emphasize their desire for autonomy, both are deeply dependent upon their respective allies and partners. 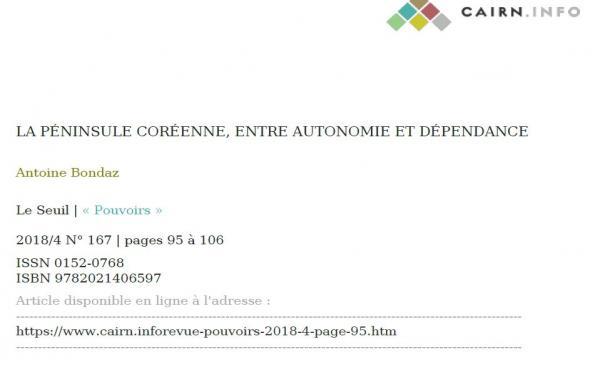 The korean peninsula between autonomy and dependency