On 11 February 2020, as part of the Korea Programme, the FRS held a closed working meeting with the Special Advisor to the President of the Republic of Korea on National Security and Foreign Affairs, Professor Moon Chung-in. The closed working meeting was introduced by the Director, Xavier Pasco, and moderated by the Deputy Director, Bruno Tertrais.

Professor Moon analyzed the current state of negotiations between South and North Korea, as well as the situation on the Korean peninsula. He also presented President Moon Jae-in's strategy for 2020, and the links between Seoul and Washington.

Exchanges with officials from different ministries and experts and academics were frank and productive.

Professor Moon Chung-in was the chairman of the Presidential Committee on the Northeast Asian Cooperative Initiative (2004-2005), and is the only South Korean to have participated in all five inter-Korean summits (2000, 2007 and 2018). He has served as an advisor to various South Korean government agencies, including the National Security Council, the Ministry of Foreign Affairs, the Ministry of Defence, the Ministry of Unification and the National Intelligence Service. Professor Emeritus at Yonsei University and Research Fellow Emeritus at the University of California, San Diego, he is co-convenor of the Asia-Pacific Leadership Network on Nuclear Disarmament and Non-Proliferation (APLN). He has published more than 60 books and 300 articles. 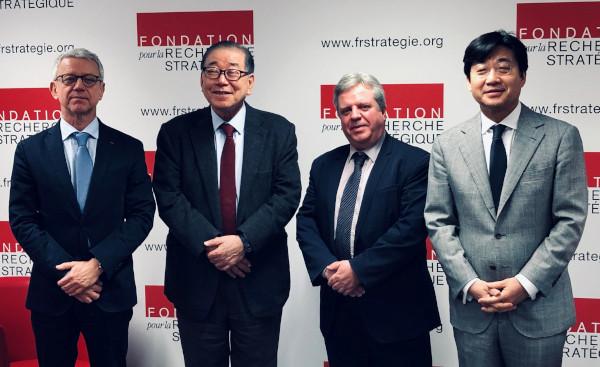