LEE Jungwoo is the former director of the Korean Peninsula Peace Regime Division of the Ministry of Foreign Affairs (MOFA) of the Republic of Korea. Since joining the Foreign Ministry in 2001, he served overseas at the Korean Embassy in the United States as First Secretary (2009-2012) and at the Korean Embassy in Côte d’Ivoire as Counsellor (2012-2014). After returning to Seoul in 2014, he worked at the office of Presidential Secretary for Foreign Policy in the Blue House and served as senior secretary for then Foreign Minister Yun Byung-se at MOFA in 2016. After finishing his directorship at the Korean Peninsula Peace Regime Division in 2018, he was seconded to the Ministry of Defense as a senior policy coordinator. He also served as director at the Foreign Ministry’s Human Resources Bureau in 2019. Director LEE has a Bachelor of Arts from Seoul National University and received a Master Degree in international affairs from UC San Diego. 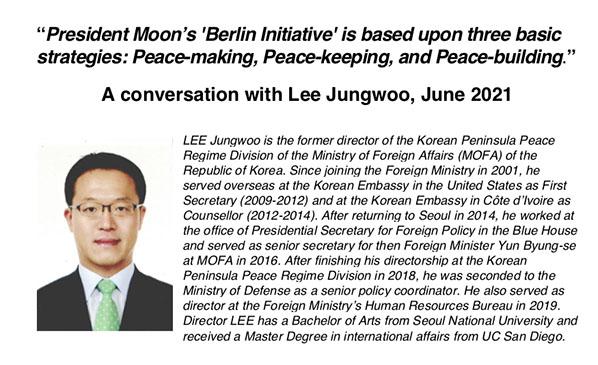