With more than 102,000 cases and the sad record of 12,000 deaths as of March 31, 2020, Italy was the European country most affected by Covid-19 at that time. It is also one of the countries that are keeping the Chinese authorities most busy through a vast operation involving sending masks, respirators, diagnostic tests as well as visits by Chinese experts to Italy, including the vice-president of the Chinese Red Cross, Sun Shuopeng, who in March advised Italian people to ”work harder” to stop the epidemic. For his part, Jack Ma, the founder of e-commerce giant Alibaba, offered a million masks and tests through his foundation. All these actions are relayed by a propaganda campaign via the Chinese embassy in Rome and the official press.

As if Italy was to Beijing a possible ground for a war of influence that could turn in her favor, Chinese diplomacy relentlessly boasts the Sino-Italian cooperation. In addition to the embassy's official website, according to which “true friendship is revealed in crises”, one finds is Zhao Lijian, one of the official spokespersons of the Chinese Foreign Ministry, who is very active on social media, always ready to denounce the West, and implying, on March 15, that Romans would have sung the Chinese national anthem from their balcony as a thank you, adding ”Grazie Cine” for sending material. No one in Italy, however, seems to have witnessed this moment. On the contrary, some commentators have reacted vigorously against attempts to take advantage from the Italian health tragedyFrancesca Marino: « Why we Italians, are angry with China – and want ‘War damages’”, The Quint, 27 March 2020 https://www.thequint.com/voices/blogs/coronavirus-pandemic-italy-china-….

China's interest in the peninsula is not new. Shortly after the financial crisis of 2008, China seized the opportunity to invest in Italian state-owned energy companies, including Eni, Enel and CDP Reti. The aim was to meet the cash needs of a struggling economy that had been hit hard by the crisis. Other investments followed, such as the takeover of the (private) tire giant Pirelli in 2016 by the Chinese state-owned company ChinaChem. Brands such as Cifa (machine tools), Ferragamo (luxury goods) and Ferretti (yachting) have also entered the Chinese fold. Moreover, Chinese tourism has, in recent years, really exploded (5 million Chinese visitors, including an increasing number of individual tourists) and should have reached a peak in 2020 thanks to the fiftieth anniversary of diplomatic relations between China and Italy, which was supposed to be celebrated at the end of the year. Could the country be on the verge of reviving a wave of Chinese investments and high-level visits in 2020, the year of Covid-19? Nothing is less certain and no one knows for sure what will become of these celebrations.

Italian Foreign Minister Luigi Di Maio, weakened since he lost the presidency of his Five Stars movement, had seized the opportunity to promote himself and broadcast the delivery of Chinese equipment on March 12 on social media. The equipment delivery followed a telephone exchange between the minister and his Chinese counterpart, Wang Yi. But many commentators were quick to point out that the Italian government itself had, from the beginning of February, sent donations to China (2 tons of equipment) and that China had a duty to return the favor. Even the Vatican state, which has no diplomatic relations with the People's RepublicSince 1952, the Holy See has kept a diplomatic representation in Taipei, Taiwan., had donated 700,000 masks to mainland China. It is therefore a fair return, especially since most of the deliveries of Chinese medical equipment to Italy in the last month, however large they may be, are the result of commercial transactions, not donations.

The truth is that there has been a great deal of confusion in Italy's foreign policy towards China over the past year. In April 2019, the government of Prime minister Giuseppe Conte was the first G7 country to sign a Memorandum of Understanding (MoU) on Beijing’s “Belt and Road Initiative” during the state visit by President Xi Jinping. Of this agreement, which was signed in a hurry, few details emerged: many promises, particularly in the port sector (Genoa, Trieste, Venice), in energy, in tourism... but no financial outcome. It is easy to see how useful Italy could be for China's maritime strategy in the Mediterranean, but to date no concrete results have been achieved. No doubt the complex Italian domestic situation is related to these hesitations. A year ago, former Deputy Prime Minister and head of the Northern League Matteo Salvini expressed his disapproval by boycotting the banquet in honor of the Chinese leader - even though one of his League associates, former Under-Secretary of State for Economic Development Michele Geraci, had coordinated the signing of the MoU during the state visit. The League left the government in September 2019. Today, even Geraci himself acknowledges that the fruits of this agreement are still awaitedInterview in Rome, February 12, 2020., and according to several experts interviewed during a recent research trip to Italyinterviews conducted in Rome, Milan, Bologna and Genova, February 10-21, 2020., chances that Covid-19 could help restoring China's image in the country appear quite low. According to Pew Research’s global survey, the Italian people are already among those in Europe with some of the most negative opinions of ChinaLaura Silber, Kat Devlin, Christine Huang : https://www.pewresearch.org/fact-tank/2019/12/05/people-around-the-glob… Pew Research Center, December 5, 2019. Beijing's admonitions to the Italian government, which had decided to stop direct flights from China at the beginning of the epidemic, were all the less appreciated as China is now the one banning most inbound flights. Diplomatic gestures of the highest authorities of the Republic, including President Sergio Mattarella, who felt obliged to organize a concert in honor of the Chinese Ambassador in Rome on February 12, had little impact on Italian public opinion, which remains predominantly Atlanticist and EurophileIbid.

Since the end of February, the Italian press has reported numerous acts of hostility towards members of the Chinese diaspora of Italy - mainly in Lombardy and Tuscany. Some 350,000 Chinese nationals, mainly from the province of Zhejiang, including the city of Wenzhou, are based in these two provinces. To this number must be added all those who, over the last twenty years, have acquired Italian nationality, often thanks to the laxity of the immigration standards. Originally not courted by Beijing, the diaspora is today - as in other European countries - the object of much attention from Chinese diplomatic personnel, who emphasize the “patriotic” character of this community. This is a way of supporting the Chinese in Italy, who feel on the contrary ostracized in their host country.

Tellingly, shipments of medical equipment and masks were sent from China on March 11 to “workers in Zhejiang province in Italy”https://www.straitstimes.com/asia/east-asia/china-offers-medical-aid-to-italy-to-fight-coronavirus-chinese-foreign-minister. Lombardy and Tuscany, which are also the two Italian provinces most affected by Covid-19, are also the regions that received the last waves of Chinese tourists on Italian soil last February. Despite the Chinese proposal to launch a hypothetical ”Health Silk Road” in the countries that have signed the MoUGeorge N. Tzogopoulos : China and Italy : Friends for Ever, China.org.cn, http://www.china.org.cn/opinion/2020-03/18/content_75829973.htm 18 March 2020, it is unlikely that the agreement on the Belt & Road Initiative will lead to concrete results before some time – if at all. Apart from a handful of politicians such as minister Di Maio, Italian officials have become aware of the controversial nature of the relationship, especially since the coronavirus crisis. While it has welcomed (like neighboring countries) Chinese investment in recent years, especially through tourism, the Italian population remains distrustful - which would explain the decision to suspend flights from China in February, at the time of the Chinese New Year returns. China's image will be all the more difficult to improve after the current crisis as the subject is becoming a domestic political issue.

Always on the lookout for an electoral opportunity, populist leader Salvini has accused China of having committed a “crime against humanity”Brandon Morse : “China committed a crime against Humanity and they need to pay”, Redstate, https://www.redstate.com/brandon_morse/2020/03/26/china-committed-a-cri… 26 March 2020 by allowing the coronavirus to spread for weeks on end. Salvini’s statement will possibly be heard by Italian voters once the pandemic is defeated. The Italian public is not fooled: the Chinese Communist Party may use the crisis politically in China itself, but in Italy the time of reckoning will come. And in order not to repeat the painful episode of 2008-2010, during which the Chinese state had acquired strategic assets in southern European countries struggling debt, European Commission president Ursula von der Leyen has already urged Europeans to be vigilant against predators from afar: “we must protect our security and economic sovereignty”Coronavirus: Commission issues guidelines to protect critical European assets and technology, European Commission press release, 25 March 2020 https://eeas.europa.eu/delegations/china/76628/coronavirus-commission-i…. For Brussels, Berlin and Paris, it is a question of limiting the risks by foreign powers, starting with China, to take control of European entities. The EU High Representative for Foreign Policy and Security Policy Josep Borrell, also referred to China when he spoke of “the geopolitical component of the current crisis, including the struggle for influence through communication and the policy of generosity”Josep Borrell: the coronavirus pandemic and the new world it is creating, European Commission press release, 24 March 2020  https://eeas.europa.eu/delegations/china/76401/eu-hrvp-josep-borrell-co…. Above all, he adds, it will be necessary “to defend Europe against its detractors”. How will Italian politicians handle the situation after the crisis? It will necessarily have to take into account the shape - no doubt dramatic - of the domestic economy. But it will also have to listen to public opinion, which has not been impressed by an attempt from China to take advantage of the situation as Italy was fighting a terrible pandemic. The time for a political response will come. In Italy, the next general election is always around the corner. 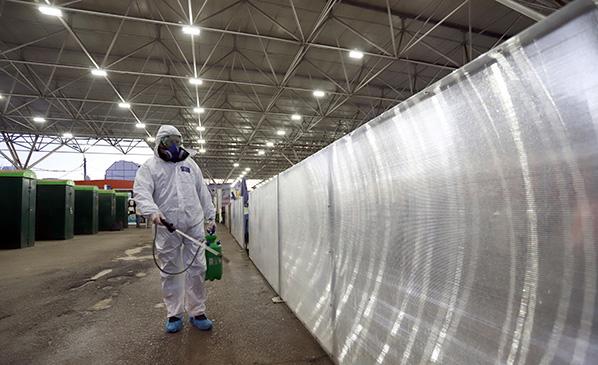