In one of the first initiatives in favor of nuclear disarmament, the authors of the Acheson-Lilienthal report “concluded unanimously that there is no prospect of security against atomic warfare in a system of international agreements to outlaw such weapons controlled only by a system which relies on inspection and similar police-like methods.” Instead, the report proposed placing all nuclear material under the control of an international organization.The Acheson-Lilienthal Report on the International Control of Atomic Energy, Washington, D. C., 16 March 1946.

The failure of the Baruch plan, proposed the following year to the United Nations to eliminate the nuclear threat based on the recommendations of this report, illustrates the challenge highlighted by its authors. On the one hand, it was possible to create a system of international guarantees on the peaceful use of nuclear technologies, strongly limiting the proliferation of military nuclear programs. On the other hand, virtually no verification regime has been deemed strong or credible enough to allow for the consideration of complete disarmament. President Truman’s 1946 statement that “I am of the opinion that we [the US] should not under any circumstances throw away our gun until we are sure the rest of the world can’t arm against us”Larry Gerber, “The Baruch Plan and the Origins of the Cold War,” Diplomatic History, vol. 6, n°1, Winter 1982. could therefore still be used today for all nine nuclear states.

As early as in 1946, the question of verification was a key issue in discussions about nuclear weapons. However, it was only in 1987 that a first bilateral agreement between the United States and the Soviet Union contained genuine verification-related provisions other than the use of national technical means (intelligence). Indeed, verification is only one aspect of diplomatic efforts towards arms control and disarmament. Only 10 per cent of agreements today have specific provisions in this area. Verification is therefore not necessarily indispensable, and when it exists, it always serves a specific purpose, in a specific context, in response to a given binding agreement and is not an end in itself.

Proposals for general disarmament in the literature generally incorporate extensive verification measures,See for instance George Perkovich and James Acton (eds.), Abolishing Nuclear Weapons. A Debate. Washington: Carnegie Endowment for International Peace, 2009. building in particular on the work of Jeremy Wiesner, who in 1961 showed that the smaller the arsenals, the higher the level of confidence in inspections must be.Jerome B. Wiesner, “Inspection for Disarmament,” in Louis B. Henkin, Arms Control, Issues for the Public, Englewood Cliffs, N. J.: Prentice-Hall, 1961. In the case of a Nuclear Weapons Convention, the concealment of a single weapon or even a few kilograms of weapons-grade fissile material could have considerable effects. It can therefore be assumed that states require a high degree of assurance of compliance with such commitments by competitors or adversaries before embarking on a disarmament process themselves. Certainly, history shows that reductions in arsenals can be made unilaterally and on the basis of good faith (reduction of half of the French arsenal after the Cold War, Presidential Nuclear Initiatives and Soviet reciprocal measures in 1991 for the elimination of tactical nuclear weapons, etc.). Nevertheless, it seems unlikely that such confidence-building initiatives would be envisaged in a perspective of disarmament to zero.

The only verified case of unilateral disarmament, De Klerk’s South Africa, offers partial lessons. The country itself dismantled its nuclear weapons in 1990 and destroyed a number of sensitive documents. Nevertheless, from 1991 to 1994, the country cooperated with P5 members and the IAEA, opened its sites to inspections and handed over its fissile material production archives, enabling the agency to affirm in 1994 its confidence in the complete nature of South African disarmament.Steve Fetter, “Verifying Nuclear Disarmament,” Occasional Paper No. 29, Stimson Center, October 1996. However, it is conceivable that this type of procedure would be insufficient in a bilateral or multilateral disarmament framework.

The requirements necessary in this type of scenario have been under consideration for many years. Thanks to the various studies and projects carried out, the outlines of realistic and necessary criteria in terms of verification are emerging. Thus, the literature focuses on the question of the baseline declaration, a document in which states could indicate their volumes of weapons, fissile materials and certain location elements, depending on the specifics of the agreement and respecting non-proliferation and national security constraints. The next logical step would be the identification of the weapons, their controlled transport in sealed containers and their tracking to a dismantling site. The dismantling operation is then envisaged without direct access by inspectors to the process (“black box”) for reasons of sensitivity, but with provisions to ensure that no objects or materials are diverted. The final steps involve the final disposition or dilution of the fissile material, verification of the consistency of the volumes returned to the civilian circuit through inspections and the destruction of other non-nuclear components.

Beyond this overall pattern, many uncertainties remain. At the general level, it is difficult to define what level of confidence (and uncertainty) could be considered acceptable by states parties to a disarmament treaty. Even more broadly, the contours of the regulatory systems governing a world without nuclear weapons are extremely blurred, whether on the future of certain technologies (use of plutonium in civil reactors...) or on the essential question of the authority responsible for enforcing such a rule.

In a more detailed and specific way, for many of the proposed steps, the technologies available today have not been sufficiently tested and need further reflection to be adaptable to a real application scenario.

In this context, several states, non-governmental institutions and scientific laboratories have chosen to launch more or less sophisticated research programs to make progress in a field that some consider essential. As progress in disarmament is slow, others question the usefulness of working on a subject that necessarily remains highly theoretical. The United States and the United Kingdom have since the 1990s been very active on this issue and have launched several cooperative projects, which have also included non-nuclear weapon states such as Norway and Sweden. France, initially reluctant to explore this field at the multilateral level, has recently revised its commitment upwards, in particular by organizing an exercise in September 2019, in cooperation with Germany, to test the procedures for one stage of a fictitious disarmament scenario. President Macron also indicated in February 2020 that this work is one of France’s four priorities in the area of disarmament.Speech by President Emmanuel Macron on Defence and Deterrence Strategy to the trainees of the 27th class of the Ecole de Guerre, elysee.fr, 7 February 2020.

This paper aims to provide an overview of the various efforts that have been undertaken in the field of verification of nuclear disarmament. It discusses the conclusions that have been drawn from this work, as well as the interplay between technological, strategic and political considerations in this field. It notes the points of progress, but also the areas that still raise questions, and concludes on the prospects of nuclear disarmament verification in the short term. 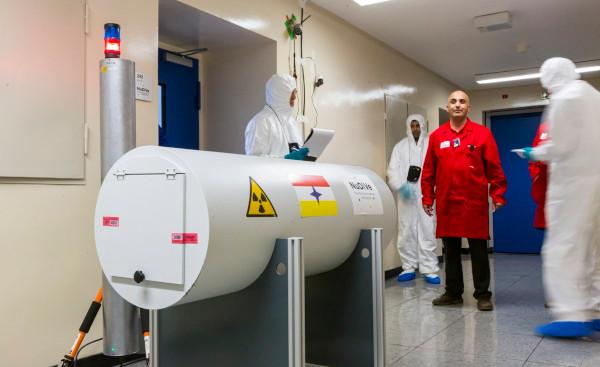 The challenges of nuclear disarmament verification