It is healthy and necessary to think and talk about France’s nuclear deterrence. The conference Résistance et Dissuasion (Resistance and Deterrence), held on 5 October 2017 in Paris, once again showed the benefits of doing so, by providing new and useful insights into the origins of nuclear deterrence.

First, the conference placed nuclear deterrence in its historical context. I firmly believe in the value of history. I am convinced that we are unable to interpret our decisions, strategies and misgivings without first having an understanding of the meaning and importance of each event.

How can we grasp how important nuclear deterrence still is today without looking back in time, without knowing about the Battle for Heavy Water (La Bataille de l’eau lourde) of February and March 1940?

Retrospection is key to discussing the spirit of resistance. This means bringing new meaning to France’s extraordinary atomic journey and the unique nature of our nuclear deterrence.

Identifying the links between Resistance and deterrence also means pinpointing the factors that led those fighting for France’s freedom to choose nuclear defence and deterrence so as to uphold the country’s sovereignty.

This issue is still relevant. In a time of apparent peace, where conflicts seem a distant memory and our approaches are so different, we must share what we know. We must constantly explain nuclear deterrence and its central role in our independence and our ability to speak and be heard.

As the French President stated on 13 July 2017, nuclear deterrence is “the keystone of our security and the guarantee of our vital interests”. The French have understood this and believe in it.

However, we must not take this understanding for granted, but must continue to commemorate, share experience and engage in dialogue. This was one of the aims achieved during this engaging conference, the proceedings of which have been published. These actions cultivate our spirit of defence, and underline the basic rules of this “strategic grammar”, which we have at times forgotten since the end of the Cold War.

The proceedings from the 2017 conference provide a reminder of the fundamental principles of this “grammar”. They remind us of the pioneering role of France in the discovery of nuclear energy. Henri Becquerel, Pierre and Marie Curie, Frédéric Joliot and Irène Curie are names that remain intimately associated with the discovery and birth of nuclear science. They also point to the fact that it was WWII that gave full meaning to the French nuclear adventure and its necessity.

This history cannot be told without mentioning the man who played a great federating role: General de Gaulle. He pushed for “Free France nuclear physicists” to work with British scientists. He refused to conceive that France would once again become a victim of tyranny and oppression, and staunchly believed that our country should not depend on its British and American allies for defence.

The Cold War confirmed these priorities and added a new factor: possessing nuclear weapons became necessary to ensure peace and stability, which meant having a strike force to avoid becoming the target of a nuclear attack.

Today, with many nations clearly modernising their deterrence capabilities and North Korea developing its own nuclear programme, nuclear deterrence is more relevant than ever.

I believe that everyone is aware of this. One of the major aspects that stands out in the proceedings from the conference is the remarkable continuity of French nuclear deterrence. It shows no political colours or affiliation, and has been affirmed by a whole series of governments. Every French leader has pursued the common goal of protecting the country’s strategic autonomy and independence. Deterrence has shown the great accomplishments a country can achieve when it stands unified behind a common goal and throws all its efforts into it. Deterrence allows us to be free.

We are the heirs of history, and are aware of the challenges and uncertainties of today’s world. The threats to France are becoming more diverse, violent and destructive, and we need to remain vigilant.

This is why, even before his election, the French President declared that our nuclear deterrence strategy must be upheld, along with its complementary sea-based and airborne forces. The President also noted the need to update these components. This stance is reflected in the military spending included in the 2019-2025 Military Planning Act. It is critical to the credibility of our deterrence force.

This includes political credibility, which hinges on unfailing national commitment. It is represented by the French President, who has the ultimate responsibility, and by Parliament, whose vigilance and support are key. It also includes operational credibility, with complementary airborne and sea-based forces that provide the President with various options and resources. This operational credibility also protects his decision-making autonomy and ensures that suitable means are engaged.

Finally, it encompasses scientific, technological and industrial credibility. The atomic adventure is an outstanding French success, and, since nuclear weapons testing was stopped in 1996, it has led to significant technical achievements and expanded the frontiers of innovation. An entire ecosystem has emerged and developed around nuclear deterrence. It plays a key role in our defence economy, which we need to promote and protect.

However this innovation, research and high standard would not be possible without the people who contribute to them. Civilians and military personnel are the faces and strength behind our deterrence. They work relentlessly towards this “oeuvre commune” (joint engagement) while providing operational credibility and readiness. I have had the opportunity to meet and talk with them to understand their demanding work at Île Longue, aboard Le Terrible nuclear submarine launcher, on the Istres Air Base and in the Commissariat à l’énergie atomique (French Alternative Energies and Atomic Energy Commission, CEA) Military Applications Division.

Associating the words “resistance” and “deterrence” was a bold decision – as was bringing together so many players to work together on exploring the historical roots of our deterrence strategy. I would like to thank all the people who organised, participated in and shaped the conference that has led to this very interesting book.

They are the ones who provoke reflection around nuclear deterrence and continue to raise awareness about what is and remains at the very heart of our sovereignty. 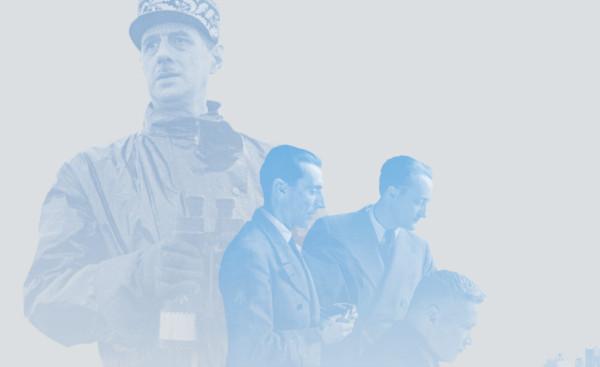 France and Nuclear Deterrence - A Spirit of Resistance