During the crisis with Turkey in the Eastern Mediterranean in 2020, the Greek government explicitly raised the possibility of activating article 42.7 of the Treaty on European Union (TEU) – the EU collective defence clause which notably provides that “[i]f a Member State is the victim of armed aggression on its territory, the other Member States shall have towards it an obligation of aid and assistance by all the means in their power, in accordance with Article 51 of the United Nations Charter”. The objective of the present report is to analyse this complex and particularly sensitive issue.

To this end, the report first places the discussion in context by reviewing the Western reactions to the recent Greek-Turkish crisis. In so doing, the report shows that it was largely due to both the internal difficulties encountered within NATO in dealing with Turkey’s actions in the Eastern Mediterranean and the perceived softness of the EU in this regard that Greece found it necessary to sound the alarm by raising the possibility of triggering the collective defence mechanism provided for in the EU treaties.

The report then examines, from a legal perspective, the conditions under which article 42.7 TEU could be activated in the Eastern Mediterranean. As a preliminary step, the report verifies that it would be formally admissible to invoke the EU collective defence clause against a member of NATO. The report then looks at the two criteria that would have to be fulfilled to activate article 42.7 TEU – namely that a given EU member state should have been the victim of “armed aggression” and that such armed aggression should have taken place on the “territory” of that member state – and examines in particular how this could prove problematic in the specific context of the Eastern Mediterranean.

Turning finally to the way forward, the report first outlines how the EU collective defence clause could be implemented if necessary in the Eastern Mediterranean. In this regard, the report stresses that the intensity of the actions undertaken according to this provision would have to be commensurate to the specific circumstances in which the latter would be invoked and that EU member states would most likely contribute to such actions in different ways. The report also considers to which extent the latest tensions between Greece and Turkey should lead to a reassessment of the ambition to operationalise article 42.7 TEU that has gradually emerged in recent years at the EU level. The report concludes, however, that the possible link between these two issues is likely to remain indirect and ambiguous, including in the context of the elaboration of the Strategic Compass and a possible political declaration on article 42.7 TEU, on account of the political sensitivities involved.

Introduction: the collective defence dimension of the dispute with Turkey in the Eastern Mediterranean

After the diplomatic crisis which erupted in the summer of 2020 in the Eastern Mediterranean, tensions between Greece and Turkey, both nominal allies within the North Atlantic Treaty Organization (NATO), kept ebbing and flowing. These fluctuations closely matched the activity cycles of the Oruç Reis, the Turkish seismic research vessel which was exploring the Eastern Mediterranean under a military escort, looking for hydrocarbon reserves in areas viewed by Greece and Cyprus as part of their respective exclusive economic zones (EEZ) or continental shelvesFor an overview of the different dimensions of the Eastern Mediterranean dispute, see for instance: Branislav Stanicek, “Turkey: Remodelling the Eastern Mediterranean. Conflicting Exploration of Natural Gas Reserves”, Briefing, European Parliamentary Research Service (EPRS), September 2020. . Thus, when the Turkish government decided to recall the Oruç Reis to the port of Antalya around mid-September, this move was logically welcomed by Greece as a first sign of de-escalationTurkish officials sent contradictory messages, however, regarding the withdrawal of the Oruç Reis. President Erdoğan in particular stated that this move was made to “give a chance to diplomacy”, but also that the Oruç Reis was docked “for restocking and maintenance” and that it would “return to mission in the same fashion after its maintenance [would be] over” (Recep Tayyip Erdoğan, “The Oruç Reis will Return to Mission after its Maintenance is Over”, Turkish Presidency, 18 September 2020).. But when the same Turkish ship and its military escort resumed their contested maritime activities one month later, regional tensions were reignited, prompting Athens to intensify its diplomatic efforts to get the European Union (EU) and its member states to finally adopt a tougher stance towards Ankara.

On 19 October 2020 in particular, the Greek minister for Foreign affairs, Nikos Dendias, sent a series of letters across European chancelleries. In a first letter, he asked some of his European counterparts to stop exporting military equipment to TurkeySotiris Nikas, “Greece Seeks Arms Embargo, Halt to EU-Turkey Customs Union”, Bloomberg, 20 October 2020.. In a second letter, he enjoined the European Commissioner for Neighbourhood and Enlargement, Olivér Várhelyi, to consider suspending the EU-Turkey customs unionIbid.. Finally, in a third letter addressed to the High Representative of the Union for Foreign Affairs and Security Policy (HR/VP), Josep Borrell, the Greek minister for Foreign affairs denounced what his government regarded as Turkey’s “illegal and aggressive behaviour” in the Eastern Mediterranean. This third letter strikingly concluded that “[i]n the short term, the only way forward for the EU [was] to stick to its principles, – especially on internal solidarity and mutual assistance between its Members, as enshrined in EU Treaties, including article 42.7 TEU [Treaty on European Union] – while unambiguously resisting any attempt by Turkey to bully its way forward”Emphasis added. The letter is available via: Aurélie Pugnet, “Face à la Turquie, la Grèce invoque une ‘vraie’ solidarité… et la clause d’assistance mutuelle de l’article 42.7. La lettre de Dendias à Borrell”, Bruxelles2, 20 October 2020. A copy of the letter has also been posted on Twitter by Nikos Chrysoloras, Bloomberg’s Brussels bureau chief.. 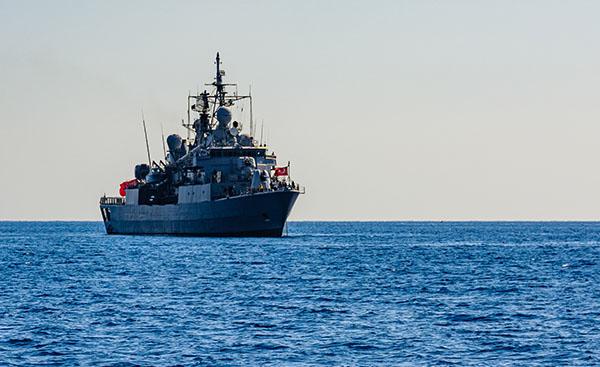 Solidarity and deterrence in the Eastern Mediterranean