The Atlantic Alliance has been facing multiple challenges in recent years: military challenges to the East and to the South, political challenges (the consequences of Brexit, the Trump presidency, the place of Turkey), and strategic ones (“hybrid” strategies, cyber defence, Anti-Access / Area Denial the weaponization of space, the role of energy…).

However, the key discussion today is the role of the Alliance in the face of the new American strategic priority: China, emerging and asserting its power, wanting to regain a leading position that it feels it has unduly lost since the mid-19th century. From the establishment of a G2 to the so-called Thucydides trap, from the land reclamation of the China Sea islands to the takeover of Hong Kong, from the “Silk Roads” to the aggressiveness towards Taiwan, China is at the centre of the “Indo-Pacific” issue. It is clearly the major contemporary strategic issue.

First, it is geographically located on the opposite side of the Atlantic, outside the NATO area as defined by Article VI of the Washington Treaty. However, in recent years, the Alliance has shown a certain interest in the region, through two phenomena: on the one hand, the conflict in Afghanistan, which led the Alliance to the western borders of China; and on the other hand, a more general policy of partnership, known as “partnership across the world”, which has established links with countries such as Afghanistan, Australia, Colombia, Iraq, Japan, the Republic of Korea, Mongolia, New Zealand and Pakistan. With the exception of Colombia and Iraq, all the others border China either directly (Afghanistan, Korea, Japan, Mongolia, Pakistan) or are located in its regional neighbourhood (Australia, New Zealand). Some see this as a new “containment” strategy similar to the one put in place by Washington at the beginning of the Cold War.

The Alliance has identified a group of four countries (Australia, Korea, Japan, New Zealand) to the point of inviting them to a ministerial meeting in December 2020 where participants discussed “the changing global balance of power and the rise of China” in a format NAC+4. The China issue was also discussed at the Alliance’s last summit in Brussels in June 2021. The heads of state and government stated: “China’s growing influence and international policies can present challenges, which we must address together as an Alliance.

We will interact with China to advance the security interests of the Alliance” (Brussel’s summit communiquéhttps://www.nato.int/cps/en/natohq/news_185000.htm?selectedLocale=en).

In fact, the Allies face the same uncertainty as in the early 2000s. Then, in the wake of the September 11 attacks, world attention had suddenly focused on one subject (terrorism) and therefore on the places of immediate US strategic concern: Afghanistan and then Iraq. To show its solidarity with Washington, the Alliance participated in an operation in Central Asia, far from the "NATO zone". The choice was simple: “out of area or out of business”.

To avoid any risk of transatlantic political decoupling, the Allies had chosen this distant expedition to Central Asia. Twenty years later, the mechanism is similar: America is concerned about China, which is even further away geographically from the NATO area, and the Allies are tempted to follow it to prevent any risk of decoupling once again. This explains their preoccupation with the Indo-Pacific, even though the Europeans do not necessarily have the same strategic perceptions as Washington. For Berlin, for example, China is a fruitful market, and it is necessary to guard against a policy that is too harsh. Paris also seeks a balanced policy that is less marked by direct confrontation with Beijing. Many others consider that “Asia is far away” and that declarations are only binding on those who read them.

The Alliance’s next Strategic Concept, planned for 2022, will have to find the right balance between political support for the Americans and maintaining a dialogue with the Chinese. Clearly, however, none of the past solutions (partnership or operations) will work. Finally, the Indo-Pacific cannot serve as a justification for the Alliance.

This perhaps explains why the NATO Secretary General wanted to link the Russian question to the Chinese question in a recent interview (18 October 2021) given to the Financial TimesRoula Khalaf, Henry Foy, "‘China is coming closer to us – Jens Stoltenberg, Nato’s secretary general'", Financial Times, October 18, 2021.. “This whole idea of in a way distinguishing so much between China, Russia, either Asia-Pacific or Europe, it’s one big security environment and we have to address it all together. (…) This whole idea that we either look to Russia or to China or to somewhere else it’s the wrong way. Because it goes together. First, China and Russia work closely together. Second, we (…) increase our collective defence, develop technology, that’s about both of them”.

Taken literally, this assessment, which unifies a Sino-Russian bloc, is questionable since the reality is far more complex and ambiguous than the Secretary General suggests. That there are links between Beijing and Moscow is obvious, but to consider that they are one and the same threat would be obviously excessive, as it suggests a single axis of confrontation with the West. Each of the two capitals is too jealous of its own sovereignty to be involved in such an alliance. The idea of a single axis does not convince. In fact, this speech suggests a return to the polarisation of a “new East” versus an “old West”. The Secretary General thus uses an old grammar to describe a landscape that has radically changed since the Cold War. This anachronism is surprising.

Not that there is no geographical continuity, but on the one hand a Russian front that mainly occupies the Europeans (not all of them, which is another subject of division), and on the other a Chinese front that mainly occupies the Americans. Artificially linking the two fronts is a way of recreating a strategic continuity with the Americans: one can see right through it.

For in the end, this interview teaches us more about the Alliance than about its adversaries. The Secretary General’s statement is a sign of the need to find an existential threat that can justify an Alliance that is losing momentum. The outrageousness of the strategic analysis made public compensates for the weakening of the Alliance’s raison d’être. This way of beating the drum masks more a conceptual weakness on the allied side than a strategic weakness in the face of a growing threat. The danger comes less from outside than from within. As a result, the external threat must be magnified at all costs to camouflage internal dissension.

Basically, it seems that the Secretary General wants to close ranks and is targeting European capitals that are reluctant to align themselves with an anti-Chinese discourse. Discussions are well underway with a view to writing the new strategic concept (which will be the subject of the next Alliance summit in 2022) and Jens Stoltenberg wants to influence the ongoing negotiations towards a maximalist line. It is not certain that this is the most skilful way to proceed. 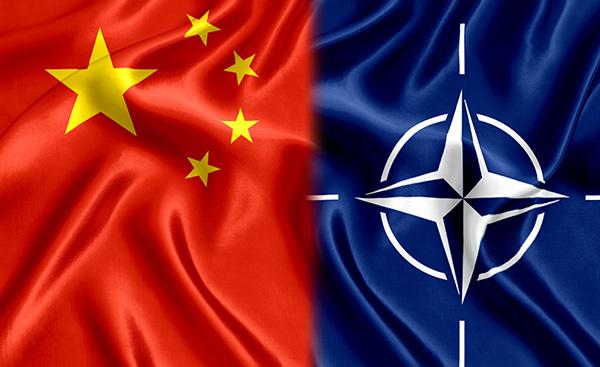 The Alliance and the China question: out of area or out of business?